This one just didn’t work out. I knew I wanted to use the iconic colours of Greek pottery and had planned to have some figures of athletes running across my nail as it was also meant to be my first day back into running after my ankle sprains which I’ve been recovering from for the last couple of months. Unfortunately neither my running or my nails happened. I had a headache and couldn’t go for my run, so decided I didn’t want runners on my nails either!

Instead I opted for patterns from Greek pottery which were just a bit too intricate for me, especially when not feeling great, and my nails are a bit too short at the moment so they looked crowded and messy.

My right hand was marginally more successful. After spending far to long on what was becoming a bit of a mess on my left hand, I knew I had to do something simpler or my right. The lines aren’t very straight but the design is probably better.

Nevermind – on to the next design (and hopefully back to running tomorrow!) 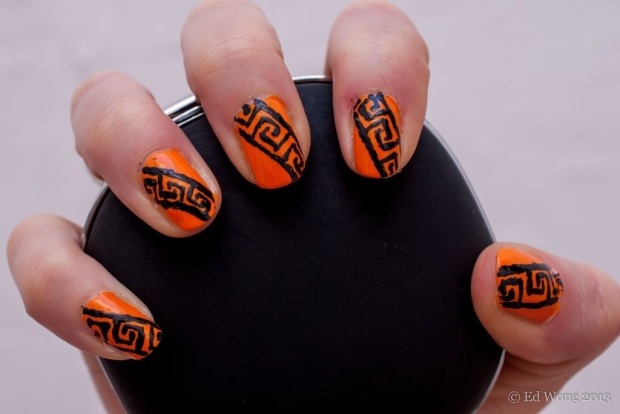 I was excited about this day of Llama Nails’ time periods challenge but found it really tricky. I lived in Mexico for two years and visited a lot of ruins while I lived there. Palenque is one of the most beautiful I’ve ever been to and left a lasting impression on me. I wanted to incorporate some ideas from Palenque but everything I came up with was way too detailed and difficult to do on such tiny little canvases (and they’re even tinier than they used to be – a week of sunshine, camping and scuba diving was not kind to my nails and they are in a horrific state!)

In the end I looked for border patterns used to decorate the edges of fabrics, stone etc and thought that they would work well on nails. I also borrowed the design idea from a tribal design on Lucy’s Stash. I used the colours red, yellow, white and black as these are representative of the ordinal directions in Mayan culture.

So here it is! (Excuse the short, not so pretty looking nails!)