I felt like doing a water marble as I haven’t done one in ages. I have a few greens that I’ve owned for over a year and I spent ages testing them out to see which ones would water marble. Not many of them worked well, or at least several of them would spread out nicely on their own but not in combination with another polish. Finally I found two which seemed to work well together.
This was the messiest water marble I’ve ever done and I’m not entirely sure why. I managed to get polish absolutely everywhere, the end result looked messy and it took me way waaaay longer than any other water marble I’ve ever done! The polishes were both minis and maybe t was the smaller brush size, but they just didn’t seem to want to drip. I also found that the polishes started to blend a bit rather than stay in neat bullseye circles.
On a more positive note, I did rediscover a great polish which I’ve only used once or twice before: Symons Street which is much prettier on the nail than in the bottle and which I should definitely use more often.
Some nails came out looking pretty good and others not so much. I think I’m still at a very hit and miss stage with water marbling where I have very little control over the end result – but practise makes perfect and the odd messy evening getting covered in green polish might help me get it right in the long run! 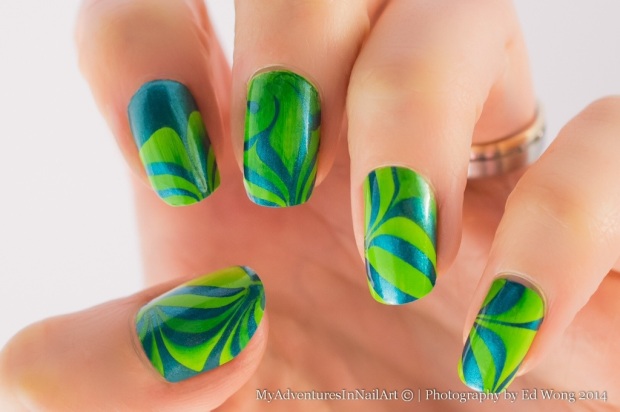