Galaxy nails are something I’d wanted to try since I first started doing my nails last year. And so I finally got round to giving them a go. I watched a lot of tutorials before I started and found that the idea was similar for most designs. I particularly liked this tutorial from nail art 101, cute polish’s video tutorial and this tutorial by 3dnailart who used really nice colours.

So most tutorials advised starting with a coat of black but there were a few who chose a dark blue instead. I went with a dark blue with fine glitter in it: Jacob’s Protection – Essence.

Next came the sponging part and I used a variety of colours in tiny amounts starting with a thin pearly white: Top of the Ice Stream – Essence and then a bit of yellow, blue and purple (Mellow Yellow – Sally Hansen, Matte Aqua – BYS, Baker Street – Nails Inc and Impulsive – Revlon)

Then I added little white dots to make stars. I really loved the way cutepolish had done lots of tiny stars really close to each other instead of random spaced out dots like other tutorials showed so I tried to copy this.

I finished the whole thing off with a light coat of a silver holographic polish: Hello Holo – Essence but I don’t think the coat was light enough and it looked a bit too busy. Maybe I should have sponged the holo on or left it out completely. 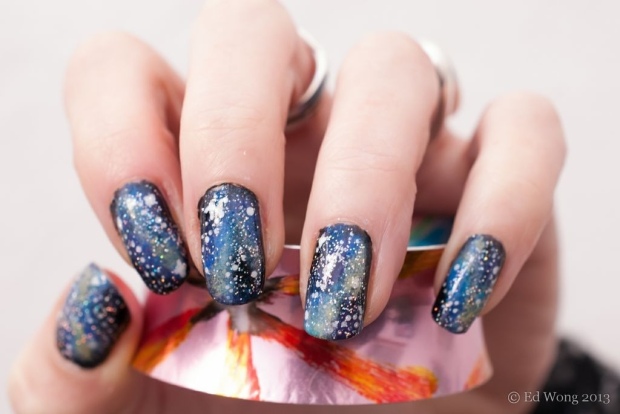 I was quite happy with the result but really felt there was too much going on and it needed to be a bit simpler. I think this is a technique/design that needs several attempts to try out different colours, number of dots and amounts of glitter to get it just right – so I’ll more than likely be returning to this to try and get it as I want it.