Here’s another one I should have posted a while ago… Around the end of November and beginning of December all my friends innJapan started posting their autumn leaf photos on Facebook. I was pretty jealous as autumn was by far my favourite season in Japan with all the gorgeous bright colours on the trees. We decided to have a weekend away and visit a little town here in Andalucia called Alhama de Granada which is known for its bright yellow autumn leaves. Some autumn leaf inspired nail art seemed a natural addition to the trip and I decided to try sponging for the first time.

I took inspiration from this video by juliatmll. I was really pleased with the result of the sponging and it was much easier and less messy than I thought it would be, so definitely a technique I’ll be using more often.

I’m not sure stamping vet the top was such a good idea, and wasn’t part of my original plan, but I noticed that one of my stamp sets had Japanese maple leaves on them and decided to stamp some random red leaves on top of the sponged background.

Here are a couple of pics of the yellow leaf carpeted floor in Alhama de Granada which was a beautiful place to spend a few hours. 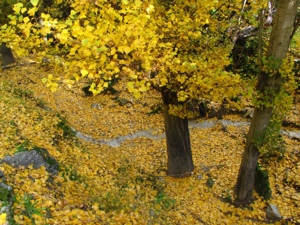